Warning: "continue" targeting switch is equivalent to "break". Did you mean to use "continue 2"? in /var/www/futuregas.dk/public_html/wp-includes/pomo/plural-forms.php on line 210
 GasDebate: The role of gas in future energy systems – FUTUREGAS

Hydrogen Denmark ended this year’s People’s Political Festival on a high note with a debate on the role of gas in the green energy transition. The Futuregas-project served as the foundation for this debate and the participants were the CEO of Hydrogen Denmark, Tejs Laustsen Jensen, Professor and head of department at DTU Management Engineering, Poul Erik Morthorst, Deputy Director General of Danish Energy Association, Anders Stouge and the Director of Biofos, John Buur Christiansen. Peter Rathje, Director of Project Zero, was meant to participate but unfortunately, he was unable to attend. The debate was excellently moderated by Jeppe Danø from Energinet, and it was conducted in a lively and interesting manner. 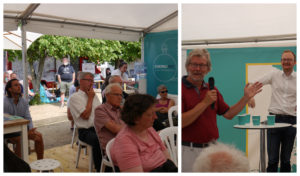 The audience joined in with relevant questions and brought in an active perspective of consumers. Former Danish minister of Environment and Food, Henrik Høegh, was in the audience and contributed with his experience and political perspectives on gas in Denmark. 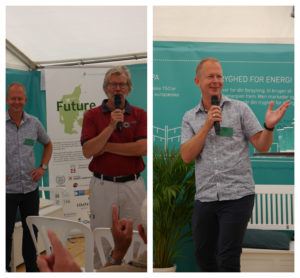 Each of the panelists shared their view and discussed the issues on which there is a need to find common ground in order to move forward. Gas will an indispensable part in a sustainable energy system based on renewable energy as it can even out the instability of a system based on weather. By focusing more on further utilization of green electricity (from e.g. windmills) rather than the production of it, it is possible to create a stable supply of energy for the consumers. Green electricity has so much potential if used in a process rather than being the end of a process. By using the excess electricity from days with strong winds to produce green hydrogen, the energy can be stores and used for a variety of different purposes – not least in regard to gas. By broadening the perspective on energy production and focusing more on intersectoral integration within an energy system it is possible to ‘store’ electricity in the existing gas infrastructure. This infrastructure is in very good shape in Denmark and it holds great potential as a ‘buffer’, a safeguard to take over when energy production is in flux and the supply unstable. 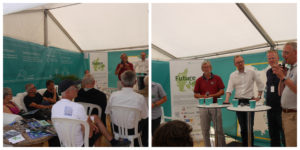 The storage of renewable energy is the greatest hurdle to overcome on the path towards a full green transition. Academic researchers and industry representatives are working all around the globe to find the best way of creating the means of stability that is necessary to ensure the viability of a full scale energy system. The aim of the Futuregas-project is to uncover and formulate the potential of gas as well as the existing Danish gas-grid in this precise context.